“No cultural event or ceremony can be observed in the absence of dancing and celebration.

“No cultural event or ceremony can be observed in the absence of dancing and celebration. It is the only way we are able to communicate with our ancestors.”These are the words of Ntolola Morena, an elder in the community and one of the last few people who still participate in the tradition of Kiba le Dinaka in the same manner it has been done for decades. Kiba le Dinaka is a traditional Sepedi dance, performed on ceremonial and ritual occasions which are known as meletlo. But what also makes this dance distinct is the fact that men are often seen dressed in kilts while the women wear traditional Sepedi dresses called di ele, tuku or tukwane, which is the head wrap, and colour beads called diphetha around their necks.

According to Ntate Morena, the Bapedi people from the Sekhukhune village in Limpopo still continue to wear kilts as a symbol of the war that King Sekhukhune battled, a story he was told by his grandfather. Other Bapedi communities choose not to wear kilts anymore as it does not apply to the area where their king ruled.

He was there and experienced a time when young men would proudly walk around in their kilts as they perform the Kiba le Dinaka dance; he even lived to observe how the same kilts and designs were adopted by the early ZCC church as well.

What really saddens Ntate Morena is seeing less and less young people doing the dance, especially because the Sepedi tradition is inclusive in nature, it brings the young and old together especially during meletlo. 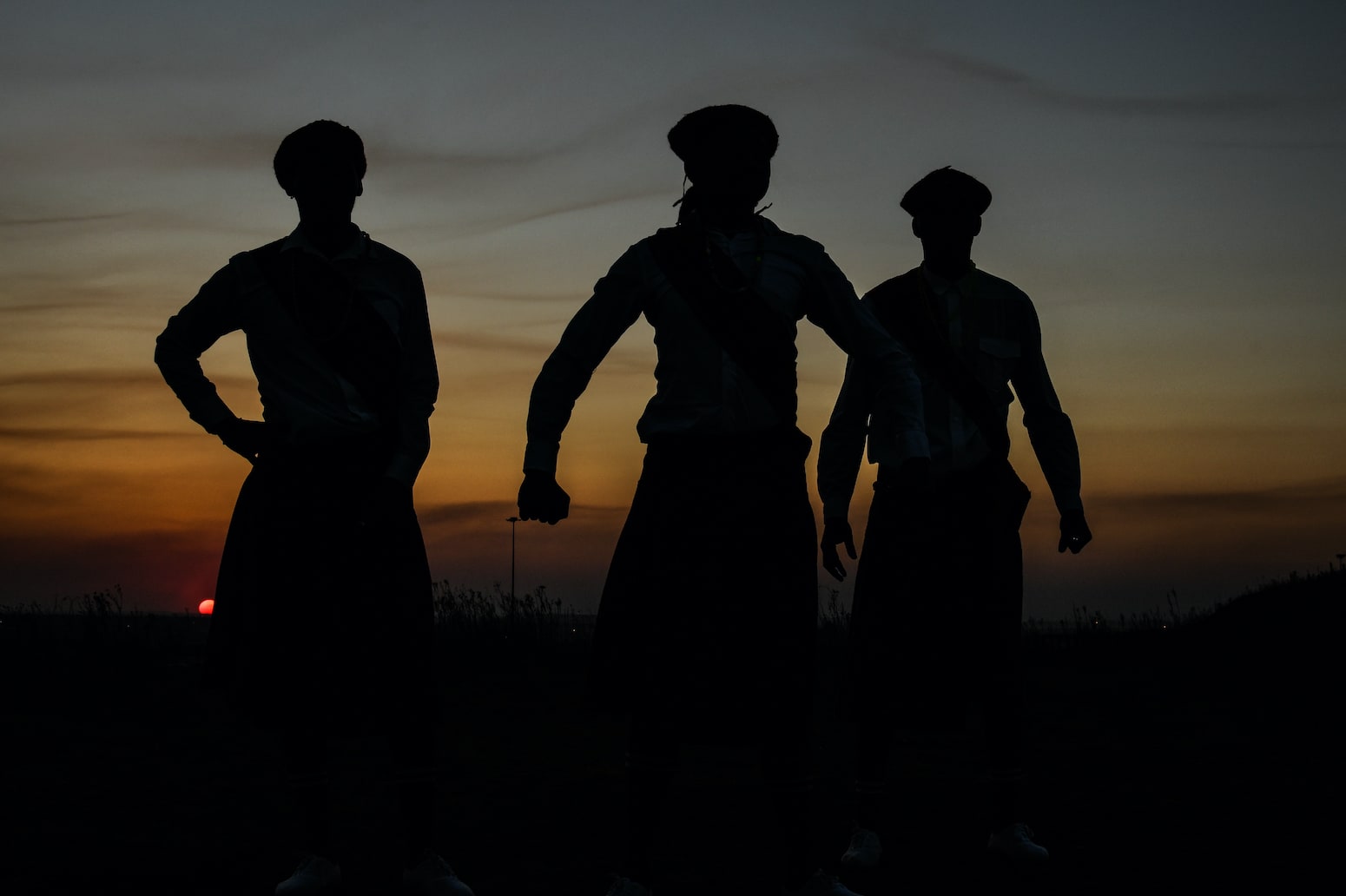 As Ntate Morena was preparing for a wedding, he took us through the journey of how one can prepare for Kiba le Dinaka. Days before the event, he started creating what is called Mašwa šwadi, which are Sepedi anklets that are used as musical instruments. He first finds a strong string and creates pockets that he fills with either stones, beads or seeds. He pulls the pockets together with the string and makes it just tight enough to go around his ankle and make the ‘ch-ch’ or rattling sound that he fondly loves. The perfect sound takes practice to master, as he jokingly compares it to playing marimba with your ankles.

On the day of the ceremony, serenades of a flute or a fluit, as he would call it, can be heard from kilometres away. As the community gathers, he explains that playing the flute is a symbol of honour and something that is usually left for men to do while the Kiba is performed.

As the singing and dancing proceeded, he explained how by just listening to meropa or drums in English, you can immediately deduce what kind of event is taking place. A slower sounding drum indicates that it could be a funeral or a sombre event while the louder more upbeat drums are usually played at weddings at a faster pace.

He concluded by performing the dance for us as he and some of the people in the community formed a circle with each person who went into the circle vigorously stomping their feet in unison while blowing their flutes at the same time and in the same tune and following the beat of the drums.

“I was taught this dance by my father and he by his father, however, today I can only count a few young people who can still perform Kiba le Dinaka. I’m happy that you could come all the way here to capture my story and help me get this knowledge to young people so that this tradition doesn’t die and our culture is not forgotten,” concluded Ntate Morena.

Add to this story by sending a voice note to this link to ensure that this part of our history continues to be told.

​​55-year-old Mirriam Baloyi, one of the elders in the Siyandhani v

Music is a spiritual experience and in African culture, being able